I wrote the following commentary for Kinesis Money.  A portion of it was derived from analysis I presented to subscribers of the Mining Stock Journal a couple weeks ago. You can learn more about this newsletter here: MSJ information

It’s likely that the next cyclical, sustainable move higher in the precious metals sector has begun. The silver chart to illustrate why I think this may be the case with gold and silver:

The chart above shows a 5-yr weekly of SLV (representing the silver price). The same charts for GLD and GDX look quite similar to the SLV chart.

After peaking in August 2020 following the post-lockdown bull party in all financial assets triggered by a massive dose of money printing by the Fed and other Central Banks, the precious metals sector has been in a two-plus year consolidation/pullback. That pullback was completed at the end of September and has been followed by sharp rally in gold, silver and the mining stocks.

From a technical standpoint, the precious metals sector looks ready to move considerably higher – note the set-up in the MACD in the above chart. I use the MACDf as a technical tool for multiple-year, weekly charts asit is slower-moving than the RSI and, to some degree of validity, reflects the longer-term potential for a move in the markets. 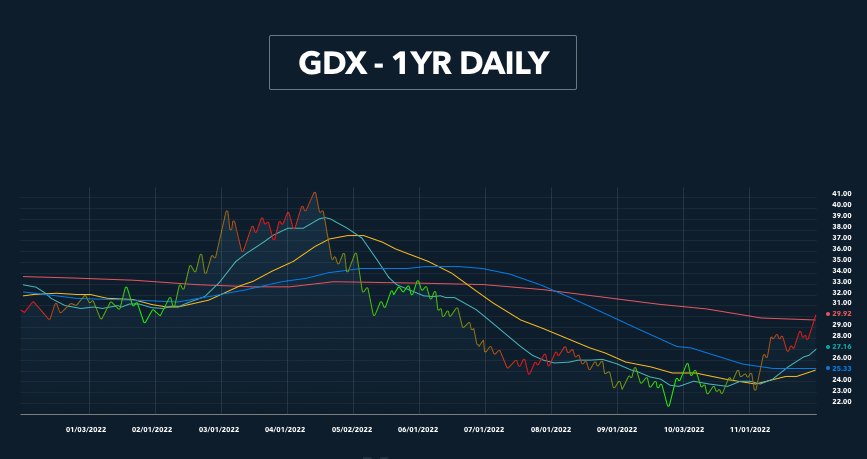 After a brief trip back below the 200 dma, it shot back over the key moving average on Wednesday (November 30th), thereby successfully fending off an attempt to drive the price lower.

From a technical analysis standpoint, an investor who likes to use charts as part of the tool-kit for investing and trading would be hard-pressed to find a more bullish chart set-up than the charts for gold, silver and the mining stocks.

Certainly the technical picture for the precious metals sector is more than supported by several fundamental factors. It’s been well-documented that the banks have been reducing their net short-exposure to gold and silver futures contracts on the COMEX. This move has been mirrored by the BIS, the Central Bank of Central Banks, which has nearly eliminated its gold swap transactions (BIS gold swaps) after the swaps outstanding reached an all-time high in February.

The BIS gold swaps are a gimmick used by the BIS to make available BIS gold bars that can used to “allocate” bars to large buyers who choose to leave their bars in the custodial safe-keeping of London bullion banks.

The problem for the BIS is if the legitimate owners of those bars decide to take possession of the bars and remove them from London bank custodial services. The only reason I can think of that that the BIS would largely eliminate its exposure to upside price risk in gold and silver is concern about the probability of a big move higher in the sector that might trigger a run on bars on London bullion vaults, including the “swapped” BIS bars.

This action by the BIS thus removes the risk of its exposure to unallocated gold bars in London bullion bank custodial vaults, which implies that it be may worried about either a big move higher in gold or a run on the physical bars in the custody of London bullion banks – or both.

Furthermore, I would make the case that, particularly after the nickel short-squeeze earlier this year, there’s growing distrust by investors of leaving their physical gold and silver bars in custodial vaults. I firmly believe that, when it comes to physical silver, possession is ten-tenths of the law.

Finally, in response to the ongoing global bear market in equities and a growing fear of another credit market crisis, I expect to see movement of investment capital out of financial assets and into the precious metals sector that would entail a move into physical gold and silver followed by a speculative frenzy in mining stocks. Institutional investment portfolios in totality have a tiny percentage of assets allocated to gold and silver (less than 1%). If these funds allocated just 2-3% of their assets to the precious metals sector, it will be accompanied by soaring prices for gold, silver and mining stocks.

GoldSeek Radio Nugget -- Bill Murphy: Up, up and away, for Gold and Silver...