“The Most Overrated Silver Coin in the World”

Even as silver prices have begun to rally off their lows for the year, the white metal remains one of the best bargains in the investment universe. Few other assets are as cheap on a historical basis as silver is today.

It’s an opportune time for investors to favor precious metals over financial assets and to favor silver over gold. 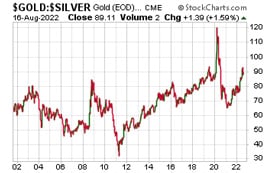 Silver at current levels represents a fantastic value proposition. That said, not all silver products available to investors are screaming buys. In fact, some are overpriced. Especially one bullion coin that remains shockingly popular despite the exceptionally poor value it has offered since 2020.

For starters, silver stackers should be especially wary of coins touted as “rare” by numismatic peddlers. Such products command hefty premiums over spot prices, carry huge bid/ask spreads, and often aren’t even particularly rare or collectible.

But bullion Silver American Eagle coins produced by the U.S. Mint aren’t rare or necessarily collectible. So why are they now selling for roughly 70% over their silver melt value?

Ever since the COVID-19 lockdowns of 2020, the U.S. Mint has consistently failed to produce enough silver coins to keep up with demand. Mint officials blame supply chain disruptions and shortages of the silver blanks that are ultimately minted into coins.

Yet other mints (including sovereign mints) around the world haven’t had such persistent problems with sourcing blanks or meeting production goals. Not even close.

Privately run mints in particular have quickly adapted to changing market conditions and are supplying the bullion market with plenty of rounds and bars to help make up for the shortage of Eagles.

The Silver Eagle Risks Becoming a Symbol of Government Incompetence

The U.S. Mint, like other U.S. government agencies, seems to operate based on inflexible adherence to fixed standards and procedures.

As a result, Mint bureaucrats are incapable or unwilling to find any creative ways of increasing production. Always operating hand-to-mouth on blanks, they’ve pointedly refused to build up surpluses of the blanks during periods of slower demand. God forbid the U.S. Mint actually have extra silver sitting on the shelf!

Furthermore, only the Sunshine Mint is currently supplying blanks to the U.S. Mint for its Silver Eagle program.

The U.S. Mint is reportedly difficult to work with… and as a result, few private mints in the U.S. are interested in diverting silver production to government purchasing managers when they are already more than swamped with private demand.

Year to date, the Mint has made only 11.6 million ounces of silver bullion American Eagles available for sale. That’s about half of what has been supplied through the first seven months of previous years when silver bullion demand has been similarly strong.

The U.S. Mint Is Violating Its Statutory Duty to Supply the Market

It gets worse. U.S. Mint officials are actually violating their statutory duty to produce enough coins to meet market demand.

The law (31 U.S. Code § 5112(e)) states, “the [Treasury] Secretary shall mint and issue, in qualities and quantities that the Secretary determines are sufficient to meet public demand coins which— (1) are 40.6 millimeters in diameter and weight 31.103 grams; (2) contain .999 fine silver; (3) have a design— (A) symbolic of Liberty on the obverse side; and (B) of an eagle on the reverse side.”

The Treasury Secretary is allowed to “determine” the quantities that are sufficient, so a great deal of subjectivity is built in to the “shall mint” mandate. The market, though, has clearly determined that the quantities of Silver Eagles being minted is insufficient.

Yet, due to inertia from the coin’s previously deserved credibility and popularity, demand remains strong today – despite the stomach-churning, sky-high premiums over silver spot.

All this makes Silver Eagles, in real estate parlance, the most overpriced house in the neighborhood. The upshot is that the neighborhood of silver bullion products contains a multitude of better buys – and value-focused investors are increasingly turning to other options.

Various other silver coins, rounds, and bars that contain the same 99.9% purity of Eagles can be purchased at a discount of up to $10 per ounce versus Eagles in many cases!

Buying Silver Eagles now is a decision to sacrifice as much as 50% of the eventual return when selling down the road. It’s unlikely the bulk of that extra $10 per ounce will be recovered.

In fact, current holders of Silver Eagles have a potentially viable arbitrage opportunity. They can sell their Eagles to Money Metals for $9 over spot – the highest bid prices ever offered on Silver Eagles – and use the extra cash to buy privately minted bullion products or other sovereign coins.

The net benefit of switching out of Eagles at this unusual moment and into lower-cost forms of silver will be owning more ounces without having to commit any new cash.

There is a potential for tightness in supply of available physical silver to emerge. In recent weeks, silver inventories on the benchmark London Bullion Market Exchange have fallen rapidly – but there is not currently a true shortage of silver.

That said, silver spot prices may need to move higher – perhaps much higher – in order for the market to keep physical supply and demand in balance.

Were an actual silver shortage to develop, then it’s theoretically possible that the entire retail bullion market could begin to trade more like Silver Eagles, as any available coins, rounds, or bars would be valued at a premium.

For now, though, most retail silver products can still be had on the cheap. Unless you have special reasons, we suggest you avoid buying today’s “Most Overrated Silver Coin in the World” until conditions change.

Stefan Gleason is President of Money Metals Exchange, the national precious metals company named 2015 “Dealer of the Year” in the United States by an independent global ratings group. A graduate of the University of Florida, Gleason is a seasoned business leader, investor, political strategist, and grassroots activist. Gleason has frequently appeared on national television networks such as CNN, FoxNews, and CNBC, and his writings have appeared in hundreds of publications such as the Wall Street Journal, Detroit News, Washington Times, and National Review.

Why The “Inflation Reduction Act” is NOT Going To Work

Why Silver Went down When It Should Have Gone Up

Why Silver Went down When It Should Have Gone Up

Era Of Fake Money Is Gone

Dollar Cost Averaging: What Is It & How It Maximizes Gold Bullion Returns