Why Most Investors Will Miss Out on the Upside Silver Breakout… and Impulse Leg Moonshots: Part II

by admin
in Silver News

Failure to “Plan Your Work” and “Work Your Plan” (for some absolutely mission-critical perspectives on this read our co-authored book, Second Chance: How to Make and Keep Big Money from the (in-play) Gold and Silver Shock-Wave.

Focus on the main premise of positioning, avoiding too much in one investment (unless highly researched and a good fit your plan) – and having an exit strategy if you’re wrong. Don’t let greed catch you by the throat.

Becoming part of “the crowd.” At some point during the moonshots you must follow the wisdom sent to Luke Skywalker from Obi Wan Kenobi as he honed in his rockets onto the galactic starship for the final drive. “Luke, turn off your targeting computer.” The “experts have infused with you and you’re now totally responsible – win, lose, or draw. You have become liberated from what Bruce Lee called “the classical mess” – hidebound, restricted, limited ways of decision-making.

It’s called a “paper profit” for a reason. It’s not really yours until you offset the position and either sequester it in savings or move into another, hopefully deeply undervalued, underappreciated asset.

Trying to get “the last one-eighth.” Jesse Livermore underscored this. Reflect deeply, then act on his seminal work “Reminiscences” The “animal spirits” of traders will be out in full force until all buyers have been satiated. Don’t be the last buyer.

Failure to ask “How Much is Enough.” You must begin to address this question now – not in the heat of battle. Meditate on the answer? Watch how a piece of bark or a Japanese candle floats downstream (your opportunity) and does not return?

Failure to see that this is (by definition) a one-time “Singularity.” Perhaps with each commodity acting on its own metrics/timing – what I refer to as “golden popcorns.”

Why are not the other commodities covered in this essay mentioned in the report’s title? Because while each and every one has “super-spike” potential, I firmly believe that silver, which will spike somewhere in this continuum, offers the largest potential percentage rise of them all! 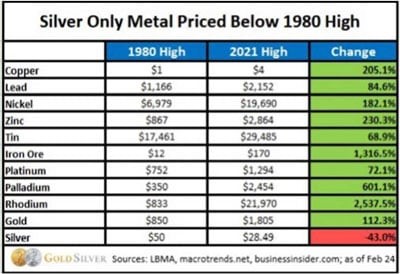 What if we are on the cusp of an “economic singularity”?

“… in which the laws and bedrock beliefs that formed the foundation of international economic order for decades, breaks down, with unknowable consequences. “If a central bank’s foreign reserves (i.e. Russia’s $630B) can be blocked/frozen, “Barring gold, these assets are someone else’s liability – someone who can just decide they are not worth holding.” -Doomberg. (The SWIFT expulsion and confiscation of assets without due process…)”

Luke Gromen, of the macroeconomic research firm FFTT sums it up:

In my strongly considered opinion — from the position of having continuously observed, researched and participated in these markets since 1974 — that “moment” is just about here…

Not getting through the “All assets are (currently) in collapse” mode. In this transformation back to some predictability you must adroitly and with controlled emotion readjust our “reset” ourselves.

“… the economy is already in recession. The Fed’s own data shows GDP growth went negative in 1Q22. And it’s barely positive thus far in 2Q22. Even if the Fed massages the data to insure we don’t see two quarters of negative GDP growth, the reality is that the markets are telling us a recession is here now.” -Gram Summers”

Lest you persist in believing that gold is destined to remain in stupor, consider that underplaying the tectonic drivers pressuring its sooner-rather-than later upside breakout; or much worse, wait until it actually happens (!) you will need to Act.

Jim Rickards’ analytical mastery has identified both the ready acceptance of other non-Western countries to buy it (thereby decreasing dependence on a dollar-first profile, as well as the post-Invasion Swiss refineries’ movement back to “neutrality” in accepting Russian gold for refining, to back its digital and commodity trading scheme.

“No one of these stories will quickly spike the price of gold. Still, all of them reveal the shape of things to come. They all point in the direction of more reliance on gold as a form of money, and the diminution of the role of the dollar in a global monetary system.”

Study charts of the last two secular “boom vs. echo” uranium bull runs, a phrase coined by Marin Katusa, for important similarity price action clues, as other commodities cycle through their own “Super Spike” thesis from David Forest.

The most profitable of these spikes may turn out to be quicker boom to echo events – shorter than the market expects as the narratives change, and transition into nanotechnology, DNA storage, zero gravity formulations, and heaven knows what else.

Seek to at all times remain more calm than the rest of the investing herd.

Consider that the unusual upcoming parabolic markets will be much more unpredictable than more staid linear methodologies.

A best guess on the upcoming order of this build out? Uranium-REE. Wheat. Copper-Nickel. Gold-Silver; Digital Miners.

At the end of what may have become the largest single commodities – miners, Senior-Juniors re-alignment in our lifetimes, please don’t be left saying “Please, lord, if you’ll just give me one more bull run, I promise not to screw it up!”

For 8 years, I (David H. Smith), Senior Analyst at The Morgan Report, LODE Digital Silver and Gold Ambassador, and frequent Contributor to The Prospector News, have enjoyed interacting with the rapidly expanding audiences from Money Metals Exchange and associated contributing sites, including three of the most widely read, Bob Moriarty’s 321gold.com and goldseek/silverseek.com as we keep working to build out our unique yet similar paths to financial success we all seek. BEST!

David H. Smith is Senior Analyst for https://www.themorganreport.com/join, a regular contributor to MoneyMetals.com as well as the LODE digital Gold and Silver Project. He has investigated precious metals’ mines and exploration sites in Argentina, Chile, Peru, Mexico, Bolivia, China, Canada and the U.S. He shares resource sector observations with readers, the media, and North American investment conference attendees.

Let My Passion Create Your Wealth.

I’ve Been Helping My Subscribers Weather the Current Economic Mess. Now I Invite You to Join My Growing Circle of Successful Investors.

The Morgan Report is all about YOU and how you can build and preserve Wealth for generations to come. We know it can sometimes seem a daunting task to protect your assets and preserve or grow your wealth. Over 15 years ago, a small group of us started The Morgan Report and formed an exclusive membership organization to promote personal freedom, an honest money system, free market wealth accumulation, and asset protection.

Through our publication, The Morgan Report, we provide you with ways to achieve greater financial security and wealth in all sorts of environments.

Learn more and become an insider for The Morgan Report, click link below…

Because there is a 100% failure rate of ALL fiat money throughout history, you will learn what to do by obtaining your Free Report. Just enter your first name, your primary email address and click the Get Special Report button below.

“To teach and empower people to understand the benefits of an honest monetary system.”

Today’s monetary system is based upon a lie. The lie is that you can get something for nothing, or perhaps more simply stated, wealth can be printed. History has shown throughout 5000 years that whenever a country has tried to maintain this illusion (lie), failure has been the result. We invite you to learn more about what The Morgan Report can do for you. Click on the Learn More About The Morgan Report button now!

Learn More About The Morgan Report *

Update On The Future Monetary System With Darren Moore

You Cannot Run A Society Without Silver

Another Big Move For Gold, Silver And Commodities – Silver Doctors

Has Inflation Been Defeated? | SilverSeek

99 Relatable Things That Only Preppers Will Understand – Silver Doctors